On the occasion of the Universal Children’s Day, Tuesday, November 20, 2018, the Parliament of the Federation Wallonia-Brussels organised a citizens’ educational activity on the theme: “Girls, boys: are they equal? What is our role here?”

Specifically, almost 100 pupils from the 3rd and 4th years of secondary school, from 4 schools in Brussels and Wallonia, participated in a great day of reflection on the question of gender equality.

This event was organised in partnership with the NGO Plan International Belgique.

The animation of the day was adapted for a school audience and focussed on interaction: activity of Theatre-action, workshop work, debates between young people to foster proposals which were subsequently presented in plenary session, etc.

This was emphasised by the children, as stated by Darren: “What pleased me the most is that we had the floor. For once, the adults listened to what we had to say.”
Equality between men and women is in the DNA of the Parliament of the Federation Wallonia-Brussels Wallonia-Brussels. The Parliament, through its competencies, the composition of its assembly (41% women), the distribution of different positions of responsibility (4 women presidents of political groups, 4 commission presidents) and the legislative texts which it votes for, positions itself from the outset as a strong defender of women’s rights.

For these reasons and given the strong commitment of the institution to the implementation of a plan of concrete actions, aiming to fully register the Parliament in the initiative, UN Women has agreed that our Assembly integrates the movement HeForShe, a first!

As Mrs Isabelle Emmery, 2nd Vice-President of the Parliament of the Federation Wallonia-Brussels, reminded us, “the choice of the theme is no accident. It is essential to address the questions of equality between girls and boys and to raise awareness with the youth regarding sexist and sexual harassment in order to eliminate these practices.”

Regine Debrabandere, Director of the Plan International, agrees with this direction: “Boys are concerned by equality as much as girls. Although rarely confronted with discrimination, they are also the subject of stereotypes and prejudice. If we want to balance the unequal power relationships, they must be involved. Equality is beneficial for everyone, male or female. It is also a challenge for boys.”

Throughout the entire event the young people repeated: “a future without sexism must be built now!”

At the end of the day, the young people came up with 10 proposals which were submitted to a vote by all the participants gathered in the hemicycle of the Parliament (see our Internet site: http://bit.ly/2E6OyP0).

The Delegate-General for children’s rights in the Federation Wallonia-Brussels, M. Bernard Devos, was also present and will not fail to mention the proposals of the young people.

At the end of the day, all the participants joined the campaign aimed at combatting violence.

This initiative was both an action to raise awareness of the rights of children and also for gender equality.

Among other themes addressed during this day, sexist harassment and sexual violence were the subject of particular attention.
These behaviours are too widespread and cannot be trivialised, tolerated, excused, let alone minimised. The objective of the day was also to allow young people to acquire knowledge of the global scope of the problem. With these tools, they will be better equipped to act and react.

It was also an educational activity, about citizenship and democracy. Indeed, the young people had the opportunity to take the place of the deputies, to debate amongst themselves, to formulate proposals and to render their recommendations in front of all the participants gathered in the hemicycle.

This event was organised with the help of the Belgian department for Development Cooperation. 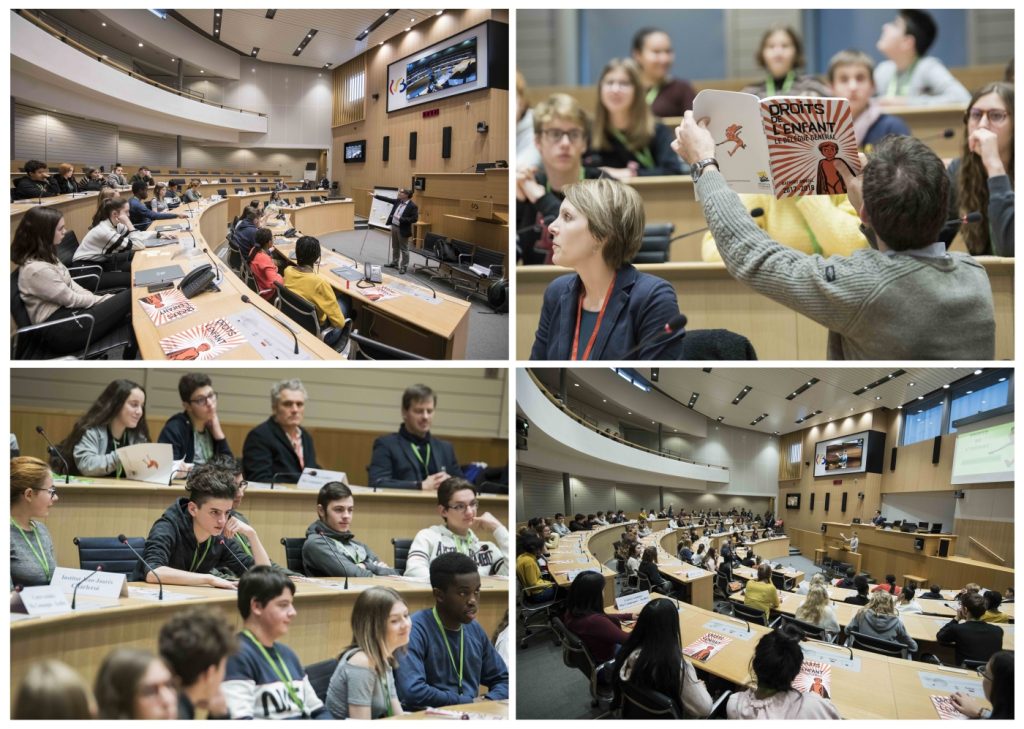