The Coordinator of the CALRE Working Group on Depopulation and Ageing and President of Cortes de Castilla y León, Silvia Clemente, has announced the launch of the Working Group Web Forum aimed at sharing the best ideas. Furthermore, this Working Group is drafting a position paper addressed to cope depopulation and ageing in the next multiannual financial period.

The President of Cortes de Castilla y León, Silvia Clemente has met with the President of the Committee of the Regions, Karl Heinz Lambertz. They held a discussion on the future of cohesion policy, the next multiannual financial period and the Common Agricultural Policy (CAP). Both has agreed on the importance of working all institutions together to face demographic challenge.

To this regard, the CALRE Working Group on Depopulation and Ageing chaired by the President of Cortes de Castilla y León, Silvia Clemente, is drafting a position paper on the opportunities and challenges present at the next multiannual financial framework (2021-2027). In particular, the CALRE Working Group on Depopulation and Ageing has already submitted to the European Commission the need to take into account demographic change in the design of the future cohesion policy, taking advantage of the European Commission Public consultation on EU funds in the area of cohesion opened from January to March 2018.

Working Group members highlighted the progressive population decline in Europe which is moving towards an ageing continent with a very uneven population distribution. Demographic change is happening and it affects directly territories balanced development. For this reason, European Regional Legislative Assemblies claim for an adequate allocation of EU funds based on population indicators.

Therefore, the Position paper under elaboration will be submitted to the European Parliament for its assessment in the design of the future EU Budget post 2020, before its final adoption.

Aiming to promote the debate on local and regional initiatives addressed to face depopulation and ageing it was created a Web Forum in the framework of the annual work of this Group for 2018. You can find the Web Forum in the following link: http://sitios.ccyl.es/calre/en/working-group-on-depopulation-and-ageing/

This space intends to boost a more active participation of all local and regional agents involved in the fight against depopulation and ageing through the exchange of good practices. The main target is to find common solutions to face the challenge depopulation and ageing involve for our regions. This Forum is open to all citizens and it is available in English and in Spanish.

Moreover, in order to promote an effective participation at this Forum, it was created the “Awards to best practices against depopulation and ageing” aiming to make known local and regional initiatives in this area.

At these awards can take part different kind of entities: public institutions, private enterprises and non-governmental organizations (NGOs) as well as non-profit institutions.

If you want to take part on it, you can find all related information as well as the e-form in the following link: http://sitios.ccyl.es/calre/en/awards-against-depopulation/

The President has also presented the main conclusions on undertaken work by this Group all along 2017.

The briefing contains an assessment on demographic and socioeconomic background of Working Group members as well as potential solutions to face depopulation and ageing.  These guidelines were obtained through the Forums and Meetings with experts at regional and European level involved in regional development.

Within key actions to be developed, it is worth to highlight the importance to support strategic sectors innovative sustainable development in each territory. Regarding Castilla y León it was showcased the need to support sectors with potential of development such as agricultural and agri-food sectors, forestry sector and cultural heritage and tourism.

Meeting in Brussels with regional experts and EU institutions representatives

The coordinator of this group and president of the Cortes de Castilla y León, highlighted the high quality of the experts taking part at this meeting, experts involved in the adoption of the future European policies.

Regional experts have also participated at this meeting by sharing best practices undertaken at regional and local level.

You can find the meeting agenda in the following link:
http://sitios.ccyl.es/calre/wp-content/uploads/sites/3/2018/06/Meeting-Agenda.pdf 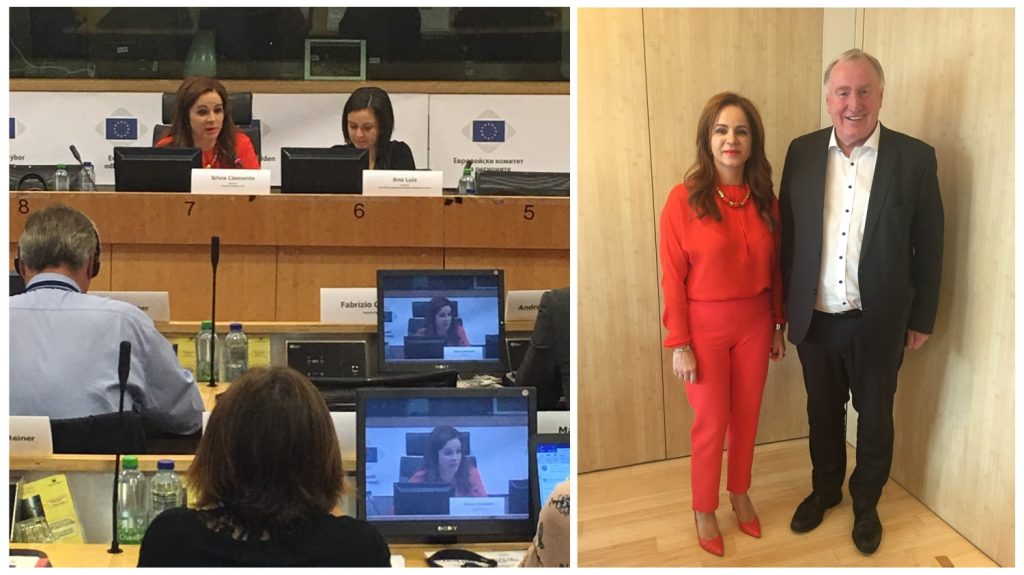